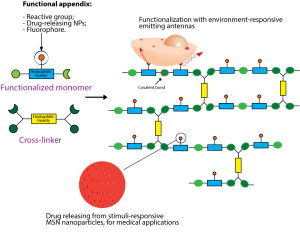 My research work, part of the ResMoSys Marie Curie Innovative Training Network, is devoted to the synthesis,
characterization and clinical evaluation of new stimuli-responsive biomaterials for clinical
applications. I am studying the possibility to use functionalized polyamidoamines-based hydrogels [F. Fiorini, 2016] for minimally invasive gastrointestinal surgery. I am responsible for the synthesis of materials with the desired properties, their
physico-chemical characterization, the assessment of their cytotoxicity using in-vitro cell coltures and for working together with our partner surgeons to understand the behaviour of the materials in-vivo on animals.

The materials obtained are stimuli-responsive, i.e. they are able to change their properties in response to a specific stimulus, such as pH or redox potential, making their use extremely versatile.

I am also involved in the synthesis of luminescent hydrogels to be used as scaffolds for cell cultures and in the preparation and characterization of nanogels for smart drug delivery.

During my master thesis I was involved in the synthesis of new bimodal probes for correlative two-photon excited microscopy/electron microscopy. The first part of my thesis was done in the group of Prof. Leoni, where I performed the synthesis of a hexanuclear platinum cluster [P. Leoni, 1996] containing two chloride ligands that are easily replaceable with conjugated organic moieties. Later, in the group of Prof. Frédéric Bolze in Strasbourg, I functionalized this cluster with organic fluorophores [F. Bolze, 2013]. In particular, I performed the synthesis of new stylbene derivatives, known for their high two-photon cross section, and I modified them with hydrophilic groups in order to increase their solubility in water. The platinum cluster and the organic fluorophores were connected via a Sonogashira-like coupling. The obtained molecules were characterized, their photophysical properties (emission and excitation spectra, lifetime, fluorescence quantum yeld, two photon cross section) were measured and the citotoxicity and accumulation was evaluated by confocal microscopy on HeLa cells, SEM, STEM and FLIM microscopy.

For my bachelor internship I worked in the group of Prof. Giuseppe Facchinetti on ZrO2-supported gold catalysts for the preferential oxydation of carbon monoxide to obtain fuel cell grade hydrogen. A fuel cell is the real “engine” of an hydrogen car, but it is extremely sensitive even to the lowest amount of CO. Commercial hydrogen is still produced from fossil hydrocarbons and contains very small amounts of CO, very difficult and expensive to remove and that however are still high enough to greatly reduce the life of  fuel cell. I performed the synthesis and I evaluated the activity of some catalysts that allow the oxydation of CO to CO2 – that is much easier to remove than CO, without also oxidizing the hydrogen to water.

We use cookies to improve your experience on this website and for anonymous statistical analysis. If you navigate the website, you accept the use of cookies.OkRead more